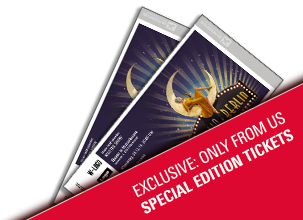 Welcome to 1920s BerlinThe Berlin of the 1920s is a pulsating metropolis. A city that never sleeps and a hotspot of the Roaring Twenties. At the same time, Berlin is full of contradictions: Glamour, luxury and an exuberant lust for life rub up against poverty, unemployment, hunger and slum conditions in the tenements. A respectable but unremarkable town for most of the nineteenth century, it suddenly expands at breakneck speed  ...!

Here there is freedom, life, lust! Come on in, join the restless crowd.

Sequinned dresses sparkle in the evening light and sultry melodies inspire riotous dancing. As the night goes on, everything dissolves into debauchery and excess. The brand-new show BERLIN BERLIN promises to immerse you in the exuberant world of the „Roaring Twenties“The Roaring Twenties must be the most thrilling decade of the twentieth century. A century later, people around the globe are still fascinated. In fashion, music, entertainment, art, culture, technology and society, the 1920s are an explosion of modernity and dynamism. People flock to cities like Berlin, attracted by a new sense of freedom ..., revealing what drives this city of sin to ecstasy – then and now. Great stars such as the style icon Marlene DietrichFamous legs, distinctive voice, suit and hat, German legend, style icon, Hollywood star, Blue Angel, Lilli Marlen, chanteuse, unforgotten diva – who else can it be but Marlene Dietrich? Her career starts with a bang: In 1930 she lands her breakthrough role of Lola Lola, the beautiful but frivolous cabaret singer in a top hat and suspenders who causes the downfall of the respectable Professor ..., the legendary entertainers of the Comedian HarmonistsSix extraordinary singers and talented performers with a treasure trove of hits – the Comedian Harmonists are the boy band of the 1920s. Even today, almost a century later, most Germans know the songs „My Little Green Cactus“, „Veronica“, „Spring is Here“, and „Beautiful Isabel from Castile“. The six singer’s journey from obscurity to superstardom in the Weimar Republic sounds like ... and the outrageously sexy dancer Josephine BakerHer short hair slicked back, a mere hint of feathers around her hips, a few strings of pearls around her neck – Josephine Baker’s first appearance in Berlin in 1926 is a sensation. She pulls faces, walks on all fours and shimmies across the stage. Berlin instantly falls under her spell. Josephine Baker is one of the most remarkable and famous women of the era. The nude dancer with the iconic banana skirt costume ... tempt you to dance with the devil. A world premiere of pure seduction.

The night is worth a sin

BERLIN BERLIN throws itself into the vortex of dizzying times. True to the motto, “scandal has wings”, the charismatic emcee and 30-strong ensemble recount the story of a society teetering on the knife-edge between Jazz Age abandon and economic disaster. Sparks fly when the chorus line girls dance the CharlestonThe Charleston is the most fashionable dance of the 1920s. Dancers everywhere kick out their legs and swing their arms, abandoning the strict rules of traditional social dances such as the waltz or foxtrot. Named after the American city where it was invented, the Charleston arrives in Europe at the same time as Jazz music, causing an immediate sensation. No longer are dancers required to glide ... and Lindy HopCan you dance socially in a couple and still go wild? Yes, with Lindy Hop you can! No longer restricted by a formal dance hold, it offers both freedom and real connection with a partner. Dancing Lindy Hop, everything is possible – even spectacular lifts and acrobatic tricks. The liberating dance was invented in the late 1920s and made famous by the legendary Savoy Ballroom in Harlem ... and when hit numbers such as “Puttin’ on the Ritz”, “Ich bin von Kopf bis Fuß auf Liebe eingestellt”, “Mack the Knife” and “Bei mir bist du schön” electrify the auditorium.

Join us on a scintillating and seductive journey back in time to experience the thrills of the Roaring Twenties first-hand.

Impressions of the show

„BERLIN BERLIN is a sensation,
a fiery, thrilling spectacle that cannot be missed.
Go and see it – it’s infectious!“